I am bewildered as to why this word has been chosen as it was only five days ago we had the word puzzled.

Due to the fact that I am starting to blog later than usual and I have to leave early to go to a meeting of the Bentley Drivers Club I an going to attempt to leave you with an image from the 1957 film, Pal Joey and why you may well ask would I do that?

The answer is simple, I always tend to start my blog with the first thing that came into my head which on this occasion was the song, Bewitched, Bothered and Bewildered, sung in the film by Rita Hayworth.

Frank Sinatra gave top billing to Hayworth and said of the poster being between the two ladies; “That’s a sandwich I don’t mind being stuck in the middle of.” 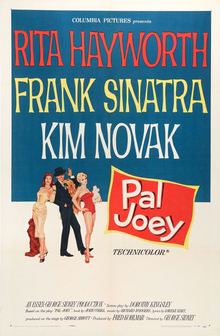 I have no idea whether the image will appear but as I’m running a little late I’m just going to press publish and hope for the best and for the benefit of the health and safety people I will add a caveat.

This poster art copyright is believed to belong to the distributor of the film, Columbia Pictures, the publisher of the film or the graphic artist.

Hopefully as I copied the last phrase from the source of the poster, the last disclaimer will prevent me from being arrested for copying the image. Prison is not the place for me, after all look what a detrimental effect it had on Oscar Wilde.