Honfleur and the D day beaches.

Just returned from taking the grandchildren to Honfleur and the D day beaches as part of an educational trip for them as they are doing World War Two in History at school and as a jolly up for myself and the wife.

It seems quite extraordinary that children are doing something in a history lesson which my father took part in and which seems to be too recent to be called history.

We took the Bentley Arnage, which is the most superb motor car for relaxed cruising across vast swathes of Europe, having a 6.75 litre engine and a turbocharger, very civilised.

I can also recommend getting the Sanef tolling tag, which is a small device which you mount in your car on the windscreen which automatically charges your bank account for the tolls on the motorway, which not only saves you the effort of leaning out the window to pay but opens the gate as you arrive at the toll, saving both time and effort.

We based ourselves in Honfleur which is a beautiful town on the Normandy coast and ideally situated for visiting the D day beaches and other sites like Pegasus Bridge, which was the first place the allies landed on 6th June 1944.

At the Pegasus Bridge Museum they have the original bridge and a modern replica of the gliders which were towed in by planes to land as close as possible to the bridge, it being night when they landed the troops were issued with clickers which were called crickets so they could find each other in the darkness. The grandchildren purchased one each  in the museum shop and proceeded to drive us slightly barmy  until we pointed out, enough was enough.

Lunch was taken at the small cafe at the end of the new Pegasus bridge which is still owned by the same family who owned it during the war and we were served by an older lady who was the very young daughter at the time of the liberation.

Our next trip was to Arromanches which was the British Gold beach and where we built the Mullberry harbour, which was constructed from concrete and towed over from Britain, large parts of which are still visible just off the coast. 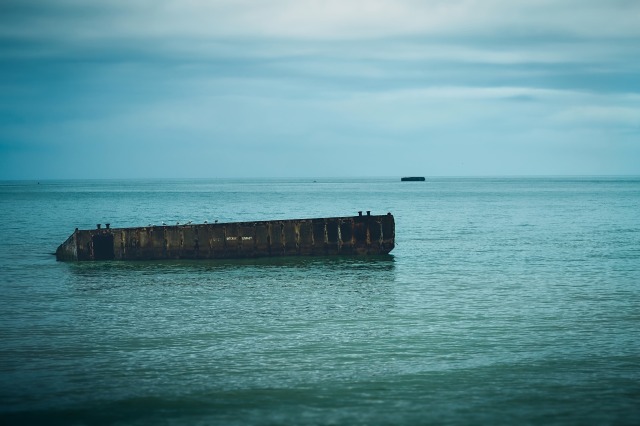 The next day we visited Juno beach where a large number of Canadians landed aided by the British, very large numbers of casualties occurred due to the late arrival of Allied tanks. We took the guided tour of a command bunker and a visit to the beach, the story of the landing was relayed by a Canadian girl as the entire museum is staffed by Canadians who come over and work for seven months before returning home.

On leaving we were caught in a storm and the car was bombarded by hailstones the size of large gobstoppers, I was very glad the paintwork wasn’t damaged.

To keep the grandchildren amused we had a quick trip to an amusement park and then a visit to Deauville which is rather splendid and well worth a visit although I would imagine it wouldn’t be the cheapest place to stay.

One never quite gets everything done when children are involved so our last day involved a fairly leisurely drive back to the Eurotunnel  at Calais via Le Touquet which used to be the place to fly over to for lunch and having visited I can see why, another splendid town, always a bit of a giveaway that it will be expensive when it has its own casino.

Finally back home after an extremely educational trip for the boys and a fairly pleasant, if expensive jolly up for the wife and myself and ready for our next little outing with the grandchildren to the Goodwood Revival. I shall be using this blog as evidence of our abilities to inform and educate when we request a day off school for the grandchildren when we take them to Goodwood, so if you happen to be their headmaster and you are reading this, please take note of the above.