A driver has claimed a gamekeeper on a Sandringham Royal shoot battered him on the head with a stick after screaming: “Mind my dogs you f****** peasant.”

This was an article written in The Sun newspaper and you have to just love the language used, for example the title “Royal Rumpus” which implies there was Royalty present, although the article does go on to say that Buckingham Palace was unable to confirm whether Prince Andrew was in the party.

I rather suspect that Buckingham Palace would be unable to confirm whether a great number of Royal personages were in the party, was the Queen perhaps, hiding in the shrubbery waiting for Prince Phillip to pick her up in his new Range Rover. Personally I doubt it.

The story continues that Mr Patrick Panks said “I came round the corner at around 30 mph and this toff was stood with his dogs, about six of them.” At this stage I am wondering how he knew the fellow with the dogs was a toff as he hadn’t yet spoken to the chap, rather a snap decision I would have thought as not everyone who dresses in country tweed is a toff.

However, he continued; “I had to stop because they were in the middle of the road, he was waving his stick around and hit the front of my car.”

“I wound down the window and before I could say anything he shouted.” “Mind my dogs you f****** peasant, I couldn’t believe it.” 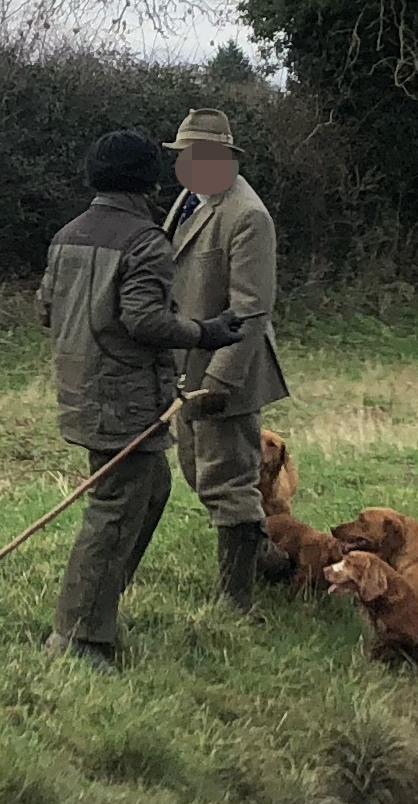 The photograph above was inserted, presumably to show the altercation between the two men but if I’m not mistaken you can clearly see a walkie talkie in the hand of one of the men suggesting to me that this is just a library picture of country folk at play.

The argument between the two men continued and I have to say it’s a jolly good job The Queen wasn’t hiding in the shrubbery for this is not the sort of language to use in front of her, no matter how broadminded she may be.

Eventually, the  gamekeeper seems to have tired of the conversation and set about Mr Panks with a stick causing him damage about the head.

Mr Panks said he suffered severe cuts to his head and neck and has cuts and bruises across both arms and his body. He went to A & E for a brain scan and doctors have warned him to expect concussion.

This is not the place to question whether the appropriate number of brain cells to rub together were found especially as the fellow does seem to have had what might be described as a damn good thrashing.

Apparently he reported the incident to the police but will not make a statement until he knows he is not concussed, which I would have thought was not an easy task, for if you are concussed I would imagine you would be too confused to know.  Perhaps someone will tell him

I have to admit I have taken a slightly flippant attitude when writing this tale but when I first read the story I couldn’t help thinking this would be so much better as an episode for a Jeeves and Wooster story, the final scene being the poor Mr Panks in A & E having shotgun pellets removed from his buttocks whilst the toffs are outside laughing hysterically.

11 Responses to A Right Royal Rumpus.