I can sleep on a clothes line.

When I first moved to the countryside I was surprised at how many things were different from town living, one of the most obvious to me was how quiet it was. As we speak I am sitting at my desk typing and I can’t hear a sound from outside and this is not because we have the most modern double glazing, it is because there is no noise outside.

It sounds like we live in the wilds of the countryside but no, we live in Hatfield Heath which is a fairly large village near Bishops Stortford in Hertfordshire, although we are lucky in that our house is fairly well set away from the road.

Coming from London where even in the suburbs there is constant noise virtually twenty four hours a day, when first arriving in the countryside one is very aware of how quiet it is especially at night where you could hear a pin drop, except when a fox is having sex which is a very strange noise and surprisingly noisy.

I am exceptionally lucky in that most of the time I have no problem sleeping, I think it’s fair to say I can sleep on a clothes line as the old saying goes. 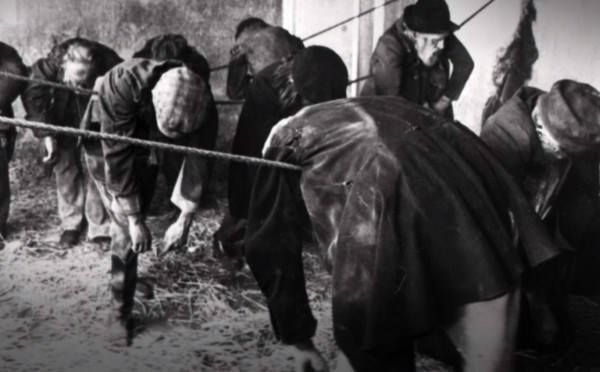 The above picture explains where the expression sleeping on a clothes line comes from, one could pay 4d (four pence old money) for a nights sleep on a very thin mattress of straw, or if you were even more poor a night on the line for 2d.

Life in Victorian Britain was fairly harsh for the poor, although obviously the rich had a somewhat better time of things. Many of the upper classes would dress in their “common clothes,” for a night of sightseeing and entertainment in the boarding houses and streets of the slums, hence the expression, “slumming it.”

Compared to this, people today don’t know how lucky they are, which reminds me of another expression once used by one of our ex Prime Ministers, Mr Harold Macmillan who in 1957 told the nation, “you’ve never had it so good.”

God only knows what expression he would have come up with to describe the current level of wealth enjoyed by most people, “rich as Croesus,” springs to mind!

1 Response to I can sleep on a clothes line.