Word of the day. Tops.

I have slightly cheated today as I have been a little busy and haven’t had time to write anything new so have brought back an older post which amused me and I thought worth a second airing.

It was originally written for a post on my first teenage kiss but has the inclusion of the word “tops” which makes it eligible for the word of the day.

My first thought on trying to remember my first teenage kiss was, I can’t remember but gradually a recollection from the dim and distant past came back to me.

Back in the 60’s it was not common practice to have any form of sexual contact with the opposite sex in your parents house, it was however quite common for young people to go to the pictures, (the movies for any American readers) for such experiences.

One would head for the back row and when the lights went down, one could commence canoodling whilst most of the people were watching the film, obviously the back row would contain a number of other couples who were there for the same reason.

I seem to remember there was a sort of check list which had been passed down from the more experienced boys starting with kissing, then perhaps kissing with tongues and so on.

One would move on down the list with an arm over the shoulder which would then fall onto the girls breast and if it were not removed one progressed to the next step, that of fondling the breast from the outside of her blouse.

Slowly, slowly catchy monkey, the next step that of fondling the breast inside her blouse which of course after much fumbling and hopefully some assistance from the girl eventually meant the brassiere was released and access to the naked breasts was achieved. At this point I think there were many teenagers who must have started to believe that there actually was a God!

Fumbling slowly onward at this point I personally attempted the impossible and slowly slid my hand up the girls skirt where to my utter surprise was met by a pair of stockings which was unusual as by now virtually all girls had gone over to wearing the more modern tights. 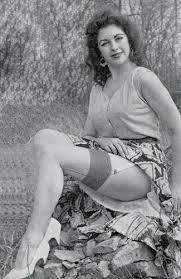 I feel my story is coming across as a little impersonal as I keep referring to “the girl,” but the girl had a name which I cannot remember but I’m fairly certain was Jane, so will continue and refer to her as Jane.

As was the way in those days girls and boys were more tightly controlled than is the case today and I found out later that Jane wore the more old fashioned stockings as her mother thought it was more hygienic for her to get some air around her front bottom.

I saw Jane on two or three other dates but our relationship was destined never to last, as I said her mother was very protective and to arrange a date required virtually filling in a number of forms in triplicate for her mother to give permission for the liaison.

It’s a shame as she was a very nice girl and we never progressed as far as having sex, for in those days that sort of thing had to wait until one had a motorcar and one could wait until it was dark and park up in the woods!

8 Responses to Word of the day. Tops.