I was prompted to write this today following a comment from Chris Hall https://lunasonline.wordpress.com/ about my post Goodbye Christopher Robin https://lordjoewells.wordpress.com/2019/03/25/goodbye-christopher-robin/ and the mention of the film on the subject.

This led into the mention of the film My boy Jack which I can also recommend as very well worth watching. 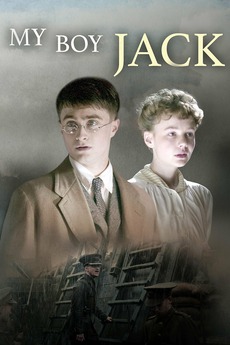 My Boy Jack is a 1916 poem by Rudyard Kipling. It was written after his son called Jack was posted as missing and later as dead in September 1915 during the battle of Loos in World War One. Jack was a Lieutenant in the 2nd Battalion Irish Guards when he was killed, he had extremely bad eyesight and was not fit to be in the Army, but in the beginning of the war his father was very patriotic and pushed for his son to join up.

Not surprisingly after his son was killed Rudyard Kipling became very anti war, after witnessing the futility of it, having lost his son. My Boy Jack is quite a moving poem but all the more so when you know the story of why it was written. I need add nothing further to this blog and I give you;

My Boy Jack, by Rudyard Kipling.

“Have you news of my boy Jack?”
Not this tide.
“When d’you think that he’ll come back?”
Not with this wind blowing, and this tide.

“Has any one else had word of him?”
Not this tide.
For what is sunk will hardly swim,
Not with this wind blowing, and this tide.

“Oh, dear, what comfort can I find?”
None this tide,
Nor any tide,
Except he did not shame his kind —
Not even with that wind blowing, and that tide.

Then hold your head up all the more,
This tide,
And every tide;
Because he was the son you bore,
And gave to that wind blowing and that tide!

12 Responses to My boy Jack.